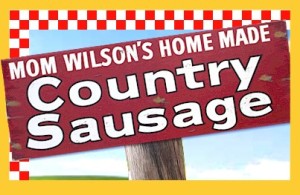 Driving north out of Columbus, toward Toledo and Detroit, U.S. 23 takes you past Mom Wilson’s Country Sausage store. You’ll know you’re getting close when you start seeing the old fashioned, Burma Shave-style signs posted on the side of the road. Buzzing by these signs at 65 mph, you learn a lot about the place, one or two words at a time.

Sure, you get the practical stuff, like the store hours: OPEN. EVERY. DAY. OCT. TO MAY. But whenever the Watershed van would roll past, there was one string of signs we always commented on: NO. FATTY. IN THE. PATTY. At first we just though the saying was funny, but then we recognized the wisdom in it, and how that wisdom could be applied to so many things other than sausage, like, say, songwriting. After that, we tried to make “No fatty in the patty” the guiding principal in our songwriting. A self-indulgent instrumental prelude? Fatty. An extra long guitar solo? Fatty. More than three verses? Unless you’re Bob Dylan, fatty, fatty, fatty*.

Our songs became shorter, obviously, most of them clocking in 3:00 or less (two of our singles,  “Obvious” and “Fifth of July,” run exactly 2:50. Coincidence? Methinks not). But the songs got better, too. More urgent. Instead of a roundhouse haymaker, we now try to make them pop like a jab to the nose. Do we always succeed? Probably not. On the one hand, once you go looking for fat, there’s always more to be cut. On the other, cut too much, and there’s nothing left but scraps. Still, though, ol’ Mom Wilson gives us a goal to shoot for. And aiming at a thing is the first step toward hitting it.

In the new issue of Creative Nonfiction magazine, I’ve contributed to a feature called, “The Tao of Find-Replace,” which essentially discusses how and why keeping the fatty out of the prose writing patty is also a good idea. I’d say a lot more about this, but, you know.

*We’re still trying work this out in our live shows. We almost always play too long, never heeding the famous show business maxim, “Always leave ’em wanting more.” Maybe if those words were plastered one-at-a-time to road signs, they’d stick with us.